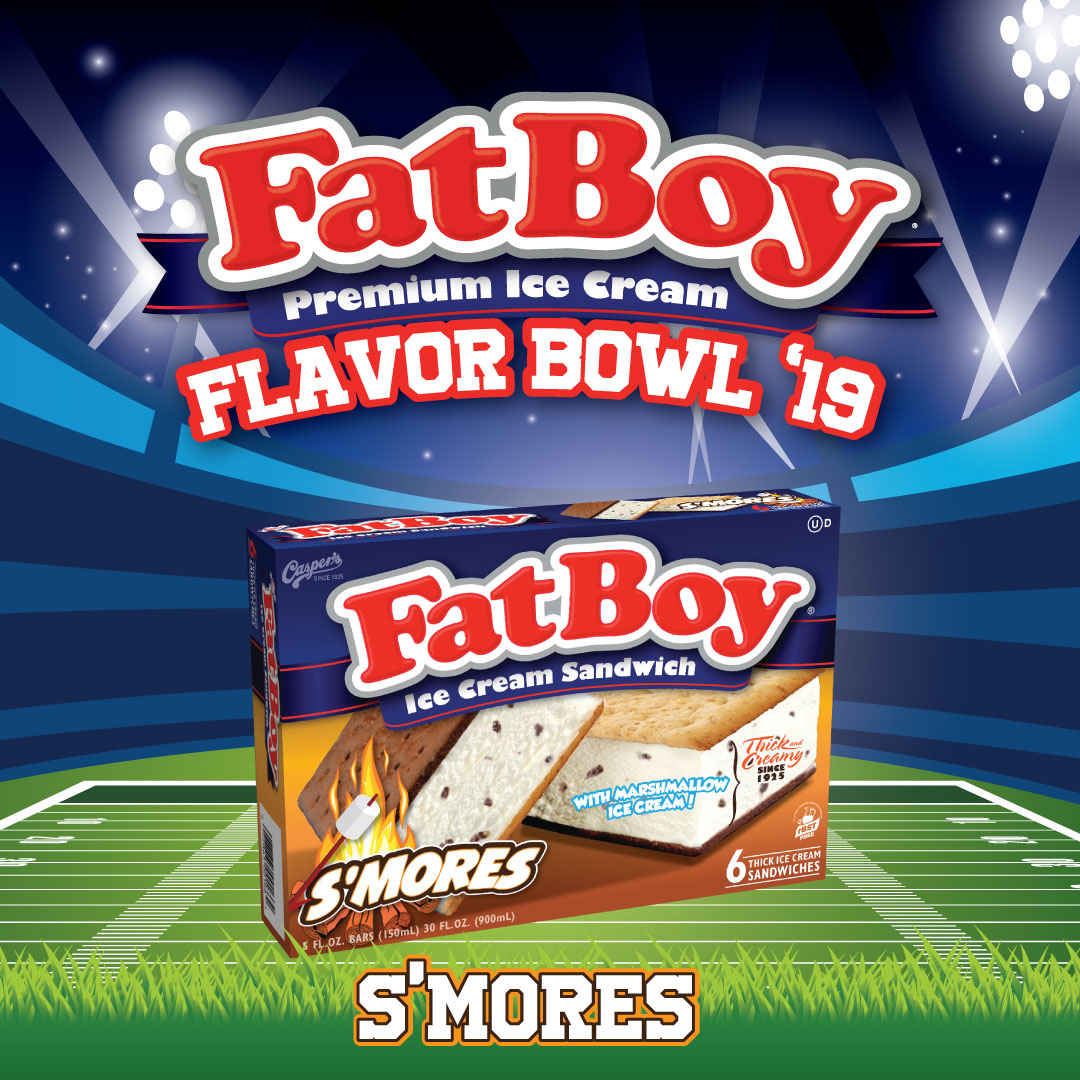 Posted at 07:00h in Uncategorized by tatisoutham 0 Comments
0 Likes

Put another log on the fire! Bust out the graham crackers, chocolate bars, and marshmallows!  It’s time for S’mores!!  The old campfire classic is the focus of this Special Flavor Profile.  We here at FatBoy know all about taking one thing that’s awesome (ice cream, for example) and combining it with something else that’s also awesome (um, chocolate wafers, anyone?) to make something truly outstanding (FatBoy Ice Cream Sandwiches!).  Well, whoever invented S’mores knew all about that too, what with the graham crackers and the chocolate and roasted marshmallows and all.  Wait, who did invent S’mores?  Maybe we should start there.

Well, it’s hard to say for sure.  Officially, however, the name – which is a contraction of the phrase “some more” – was published in a recipe for the delicious treats in 1927 in a book about scouting.  Prior to that there were recipes for “graham cracker sandwiches,” which were basically s’mores, but they didn’t use the name.

So we don’t know for sure who invented the s’more.  We do, however, know that s’mores were a very popular dessert around the campfire for many scouting organizations throughout the United States and Canada.  Both the Boy Scouts and Girl Scouts of America were reputed to have been enjoying the gooey wonderful sandwiches long before the first recipes were published.

What Makes S’mores so great?

It’s pretty obviously the combination of all three flavors that makes a s’more so delicious.  For this flavor profile, though, we’re going to focus on the marshmallows and the graham crackers… since people have written volumes on chocolate, and we don’t really have the room for that here.

What do prohibition, a pandemic, and preaching have in common?  Why they all had a part in creating the graham cracker, of course!  Okay, so it’s not really a natural conclusion to draw, but it is true.  During the early nineteenth century, a pandemic swept through the United States, and many were driven to the preaching of a man named Sylvester Graham, from Connecticut.  Graham was a big part of the temperance movement, which sought to ban alcohol throughout the 1800’s.

Graham’s preaching covered not only the holy virtues, but the healthy ones as well.  He taught that eating a vegetarian diet founded in whole grain bread was what God intended.  Graham’s follower’s, the Grahamites, who stuck to the diet Graham preached, were the reason that graham crackers were created.  So even though Sylvester Graham didn’t invent the graham cracker himself, his followers are the reason for the name.

The first company to start mass producing graham crackers was the National Biscuit Company, or NABISCO.  Today you can find graham crackers in nearly any grocery store, and they are a staple of pie crusts, and of course… s’mores!

The name for these wonderful confectionaries comes from a family of herb that is native to Asia, North Africa, and Europe, called the mallow.  Mallows grow in – you guessed it – marshes!  Hence: marshmallow.  Of course, today’s marshmallows don’t really come from these plants anymore, but once upon a time, they were medication for royalty.

That’s right.  The ancient Egyptians used the marshmallow plant to help with cough and sore throat.  They would take the root of the plant, mash it into a pulp, and boil that pulp with honey until a gum was created.  This was a delicacy reserved only for gods and royalty, so even back then, marshmallows were recognized for how special they are.

Today’s marshmallows are typically made by whipping sugar, water, and gelatin into the squishy consistency we know and love, and then adding corn starch to the outside.  They use modern gelatins now instead of the gum made from the marshmallow plant, so marshmallows won’t help with your sore throat or cough anymore, but they might make you feel better anyway.  Especially if you’re warming up around a campfire.

Okay, we know it’s personal, but we have to ask?  How do you like to toast your marshmallows? Some like it lightly toasted, with barely any browning at all and a thicker marshmallowy texture inside.  Others prefer theirs burnt to a crisp – often even preferring to set their marshmallows ablaze for a few seconds until the outside is charred and the inside is a gooey, dripping mess.  Still others take their toasting very seriously, preferring to gaze intently on their marshmallow while they position it perfectly over the flames.  They rotate the marshmallow until it is evenly toasted to a beautiful golden brown on the outside – like a four-star creme brulee – on every side, and the inside is a perfectly soft, gooey liquid that melts in the mouth.

However you toast them, a campfire just doesn’t seem right without a sharpened stick and a marshmallow on the end of it.  As good as they are, they’re just not the same without their partners, graham crackers and chocolate, though.