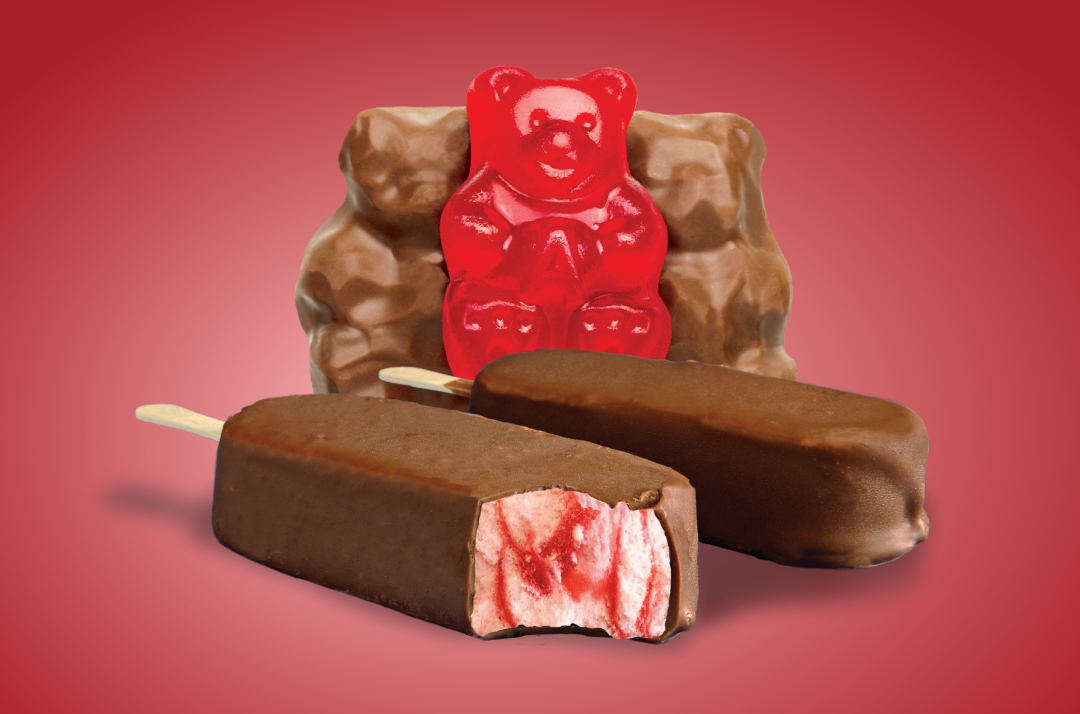 Posted at 06:00h in Uncategorized by tatisoutham 1 Comment
0 Likes

Throughout the Gummy Bear woods, the cinnamon-flavored bears are on high alert!  FatBoy Ice Cream agents have been combing the land of gummies to find the elusive cinnamon bears for their special sundae flavor – the Chocolate Covered Cinnamon Bear Sundae.

In this special flavor profile, we’ll take a look at the lives of gummy bears, how they were created along the Rhine, how they survived an economic depression and a world war, and how their magical gummy essence has expanded to create other gummy creatures.

We’ll also look at the history behind the special spice that makes those red gummies so unique – cinnamon!  This exotic spice has been taking the world by storm ever since anybody can remember, and you won’t believe the stories they used to tell about it!

How Did Gummy Bears Come to Be?

Just north of the Germany’s legendary Black Forest, along the Rhine in a town called Bonn, a man named Hans noticed trained bears in festivals and on the streets of Europe.  He became fascinated by the animals and was determined to learn their secrets.  Soon, he discovered the magic that made the bears dance, and he found a way to harness that magic into the chewy, soft candies we all know and love today – the gummy bear.

Hans’ original gummy bear recipe called for the use of gum arabic as a base, which is where the name comes from.  His gummies turned out to be so magical that even though they were introduced during the hard times 1920’s Germany, the candies survived and even thrived during all of the turmoil of the early twentieth century.

Today, gummy bears are made by several different companies and are sold all over the world.  Hans’ successors even found a way to take that magical formula and make other gummy animals like worms, spiders, and more.  Still, despite the variety in the animals, gummies usually just come in a few standard flavors.  Mostly you’ll find the fruit flavored variety, but every once in a while you’ll come across a red gummy that doesn’t taste like cherry, strawberry, or raspberry.

When you bite into that red gummy, what you will get instead is a rush of spicy, not quite hot, not quite sweet flavor.  It’ll sends your tongue into a frenzy, and you remember the flavor long after you’ve eaten it.  My friend, you’ve just bitten into a cinnamon gummy.

The cinnamon gummy bear doesn’t usually associate with the rest of the flavors.  Instead he typically comes in packs of other cinnamon bears so he can be his spicy self without being accused of being a strawberry or cherry flavored bear.

The Legend of Cinnamon

As far as anyone knows, this amazing spice has always been with us.  The ancient Egyptians used to trade for it with merchants from East Asia, where the most common cinnamon bark is harvested.  From there, the exotic spice made its way into the hands of European crusaders during the middle ages.  Europeans, even those who had traveled to the Middle East during the crusades, didn’t really have any idea where cinnamon originated.  Some thought that it came from the source of the Nile river, and that it was harvested in nets there.  Others thought that giant birds gathered the bark to build their nests, and that the Arabs had some secret way of tricking the birds out of it.  At that time, nobody in Europe realized that it was really bark that had come from as far away as China.

The most common type of cinnamon that we see today is made from the inner bark of a cinnamon tree cultivated throughout southern China called the cassia tree.  It is produced by a lengthy process that involves growing and pruning the trees, then stripping and  processing the bark once it’s harvested.

The final product has a flavor that is spicy, bold, and complex.  It mixes beautifully with sugar and dessert foods, and it has a powerful aroma that makes it very popular in candles and other air fresheners.  If you’ve watched any kind of internet videos in the last few years, you may have also seen the “cinnamon challenge,” in which people attempt to eat a teaspoon of cinnamon by itself.  Spoiler alert: It doesn’t work out well.

Chocolate and Ice Cream and Bears… Oh My!

It makes sense, then that the folks at FatBoy would be so interested in these special spicy bears.  The geniuses in their flavor department just knew that if they could capture enough cinnamon bears, they could take the secret of the bears’ awesomeness and put it into their new flavor – Chocolate Covered Cinnamon Bear Sundae.

Fat Boy flavor technicians have outdone themselves with this great specialty flavor.  They took gooey, spicy wonderfulness that is the essence of the cinnamon gummy bear, and swirled it in to some already amazing FatBoy cinnamon-flavored ice cream, and then covered the whole thing in chocolate!

The result is the creamy, sweet and spicy masterpiece we know as the Chocolate Covered Cinnamon Bear Sundae.  Outside, your tastes will first encounter the sweet, smooth flavor of milk chocolate, followed next by that cold, creamy cinnamon ice-cream deliciousness.  Then, when your tastebuds least expect it, they’ll be hit with the magical essence of the cinnamon gummy bear swirl, which will send them into a frenzy.