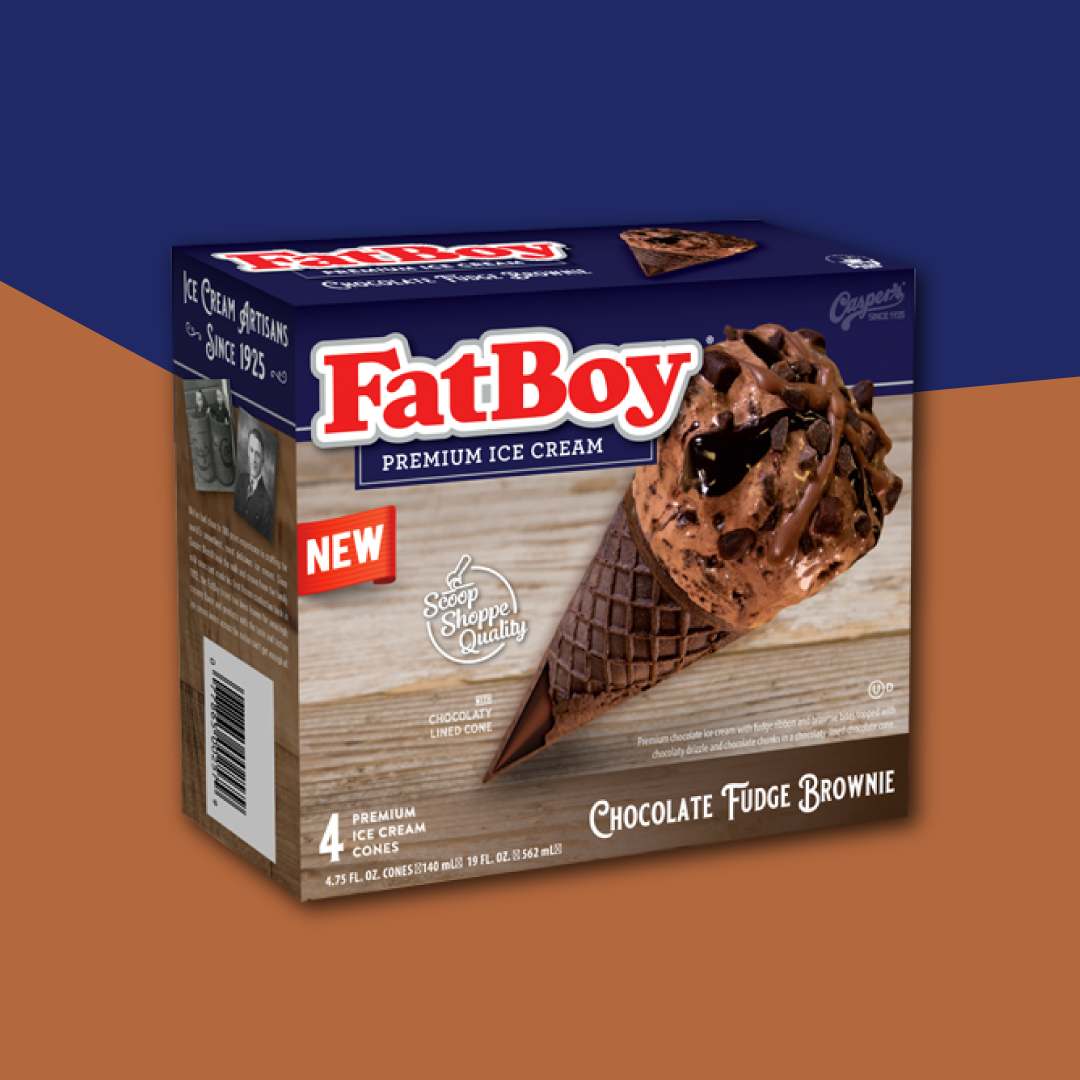 Posted at 06:00h in Uncategorized by danvinton 0 Comments
0 Likes

We’re excited to now be offering not only the finest in ice cream sandwiches and sundae desserts, but the finest in ice cream cone flavors as well!  FatBoy have pulled out all the stops to make ice cream cones that are some of the best that money can buy.  We’ll be covering each of the five new flavors in detail, including Sundae Best, Caramel Praline, Cookie Dough, Cookies N’ Cream, and of course Chocolate Fudge Brownie!

All Hail the Holy Trinity of Cocoa!

We here at FatBoy are only concerned with bringing you the best.  So when it time to design flavors for these new amazing ice cream cones, we knew we needed a chocolate variety – and not just some dressed-up, chocolate-dipped and chocolate filled vanilla ice cream cone, either.  No, we needed a chocolate flavor that comes in with the thunderous boldness of an act of God, so we decided to include all three of the best cocoa-based sweets!  As the name suggests, we’ve combined premium scoop-shoppe quality FatBoy Chocolate ice cream, ribboned with fudge, and topped with brownie bites.  And that’s not all…

To ensure that the FatBoy Chocolate Fudge Brownie Ice Cream Cone was the most intense chocolate experience one could have inside of a waffle cone, they thought, “What the heck.  Throw on some chocolate chunks, too!”  This ice cream cone is a choco-holic’s dream come true!  Oh, and did we mention that the CONE IS MADE OF CHOCOLATE AND THEN LINED WITH MORE CHOCOLATE!  If you’re a chocolate lover and you’re not already on your way to the store, we’re not quite sure what’s wrong with you.

Cocoa, the main ingredient in all chocolaty goodness, is another one of those wonderful foodstuffs that was introduced to Europeans after Columbus found this side of the world.  Mesoamerican peoples had been using it for centuries already to make delicious cocoa flavored-drinks, and even mixing them with vanilla beans to enhance the flavor.  In fact, vanilla wasn’t even used without chocolate by Europeans until well after the two ingredients were brought to the continent.  Cocoa was the thing, the vanilla was just the icing on top, if you’ll pardon the mixed metaphor.  Cocoa trees were originally only found in the Amazon basin, but after a few hundred years of worldwide popularity, the demand for chocolate meant that domestication of the trees would be necessary.  Now they are farmed in many parts of the world, so that we may never see a day when there is no chocolate.

Cocoa pods – like coconuts (no relation) – have a very thick rind (or skin) around the outside that can be nearly an inch thick – sometimes more!  Inside the pod, about 30 to 50 seeds are protected by a sweet, gooey membrane called mucilaginous pulp.  The seeds are separated from the rest of the pod and then fermented by heating.  When they start the fermenting process, they are actually purple!  It’s the heat that turns them brown.

Once they ferment the beans, all kinds of different chocolate products can be made.  It takes anywhere from 300 to 600 cocoa beans to make a kilogram of chocolate.  And boy do we as humans produce a lot of chocolate.  In the last four and a half decades, worldwide cocoa production has gone from 1.5 million tons in the ‘70s to over 4.5 million tons just five years ago!  The top three countries in the world churning out this chocolaty goodness are Ivory Coast, Ghana, and Indonesia, producing nearly 3 million tons between the three countries alone.

From Raw Bean to Chocolate Bar (or Ice Cream)

Once the beans get from the growers to the chocolate producers, they are processed depending on the type of chocolate product desired.  No matter what, though, they are cracked and roasted first.  Often those cracked cocoa beans are ground into cocoa paste, which is then mixed with cocoa butter, sugar, and other flavorings to make milk chocolate, dark chocolate, fudge, brownies, and, of course, FatBoy Chocolate Fudge Brownie Ice Cream Cone.

With So Much Chocolate, What if I Become a Choco-holic?!

Fear not.  There are no studies out there which suggest that eating our scoop-shoppe quality FatBoy Chocolate Fudge Brownie Ice Cream Cones will turn you into an addict.  However, you may become psychologically dependent once you taste the chocolate explosion we’ve prepared.  We do recommend eating responsibly, however, as some people simply lack the self control to moderate themselves – especially when so much chocolaty goodness is packed into one delicious dessert!

Clearly the FatBoy Chocolate Fudge Brownie Ice Cream Cone is made for chocolate lovers, so let’s make sure that we’ve done a good enough job to satisfy them, shall we?