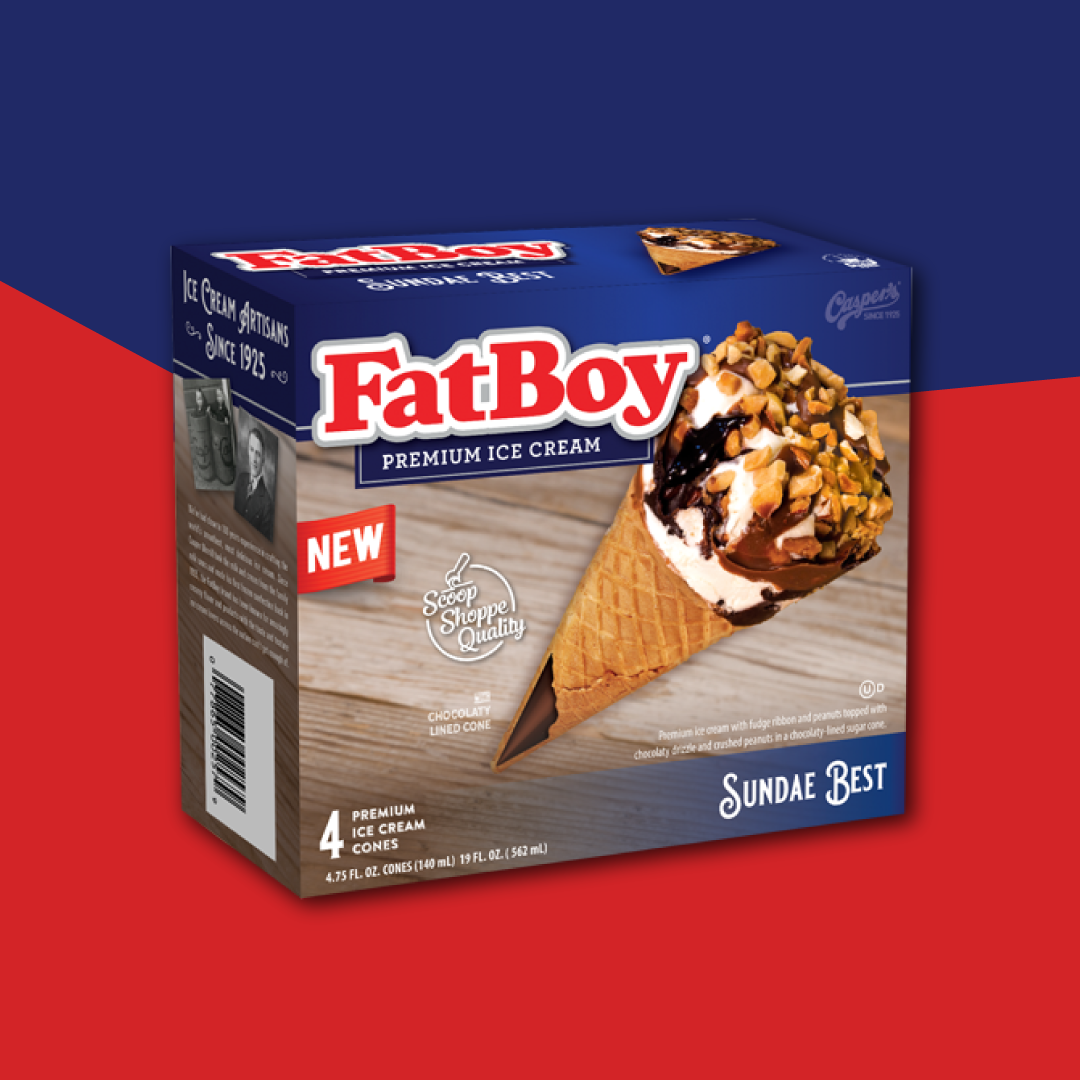 Posted at 06:00h in Uncategorized by danvinton 1 Comment
0 Likes

Hang onto your hats, ladies and gents, FatBoy, makers of some of the finest ice cream products on the market today, have decided to add cones to their collection of mouth-watering frozen treats!  I say hang onto your hats, of course, because the first flavor of these five new products we’re going to look at is called, appropriately, “Sundae Best.”  (See what we did there with the play on words?)  It’s got all the flavor of a traditional ice cream sundae, with all the class and regalia you’d expect from a Southern preacher at 8:30am Sunday morning.

As far as we can tell, the first mention of a cone for ice cream treats was in France in the early nineteenth century.  The recipe described how to roll thin waffles up into cone shapes, but like most things, the desserts took a while to catch on. And it was actually two Italians who patented machines to produce the cones.

Not until the World’s Fair in 1904 in St. Louis, did ice cream cones start to become the phenomenon they have become today.  These days, cones come in a lot of different varieties, including those cheap crumbly ones you can buy at the store, but the ones in FatBoy’s new cone line up are all waffle, baby!

The pre-filled cone, like the ones we are rolling out, was first created in Texas by J.T. “Stubby” Parker, who started the Drumstick company, which he later sold to Nestle.  Today, there are a lot of imitators of the original Drumstick out there, and almost all of them have a flavor combination similar to Sundae Best, but let’s not forget, Sundae Best is a FatBoy® ice cream cone, and that means you’re getting premium ingredients and a quality dessert that can’t be beat!

What Makes The Sundae Best Ice Cream Cone the Best?

Each of us is different, of course, and we all have own unique set of tastes – things we prefer.  Sometimes, though, there are flavors and dishes that become so popular they’re nearly ubiquitous.  Ice cream sundaes are one such dish.  The combination of vanilla ice cream, chocolate syrup, and crushed peanuts works so well together that you’d be hard pressed to find someone who doesn’t like it.  We’re not saying those people aren’t out there, we’re just saying they’re not right.

Let’s Start With the Vanilla

Vanilla, which we’ve described in this year’s FatBoy Flavor Profile posts, is the most popular flavor in the world.  Period.  None of the others even come close when it comes to the popularity game, so it only makes sense to start with that as the basis for building a sundae.  Vanilla was first discovered to be awesome by the early MesoAmerican people, and popularized throughout Europe during the Columbian exchange.  Since then, it has been used to enhance many other flavors, but that enhancing started with cocoa – the main ingredient in our next part of the sundae – the chocolate syrup.

It does seem a little counter-intuitive, doesn’t it?  On one hand, you’ve got the mild-mannered, extremely likeable, never-wants-to-cause-any-controversy vanilla – the flavor, that, despite being the most popular in the world, is also often used synonymously with the word “bland.”  Then you have chocolate.

Chocolate comes right at you.  It’s bold, it’s rich, it’s luxurious, and it will not be ignored.  How could such a succulent treat as chocolate work well with what many consider to be its flavor-opposite, Vanilla? It seems like the Yin to Vanilla’s Yang, and, well, maybe that’s why they work so well together!  In fact, for the first couple of hundred years of cultivation of each type of bean, the two were combined by native civilizations, and even in Europe it took some time before people started using vanilla as something other than a mellowing agent for their cocoa beverages.

How About we Get a Little Nutty?

Come on, now.  No respectable sundae, especially one that purports to be Sundae Best is going to show up without the peanuts!  FatBoy Sundae Best Ice Cream Cones are packed with chunky, crunchy, peanut-y goodness!

While we’re on the subject, though, did you know that peanuts aren’t actually nuts at all?  They’re legumes – technically in the same family as peas, Garbanzo beans, and soybeans!  They’re packed with protein, and they have a special place in American history.  We owe the modern cultivation of the peanut to the work of a brilliant African American scientist who has since become more than a peanut scientist, but also a powerful symbol for the struggle for civil rights in America, George Washington Carver.

It should go without saying, but these cones are filled with genuine FatBoy® premium ice cream.  There’s no cheaping-out or funny business going on here.  You get FatBoy® Premium Vanilla ice cream on top of that lovely milk chocolate bottom – you know, the most fun part of the whole ice cream cone experience – and then it’s topped off with delicious chocolate syrup and peanut crumbles.  The Sundae Best flavor is FatBoy® putting on their “church clothes” for their introduction to the ice-cream-cone world!  It’s the flavor that bears the standard for all such pre-filled ice cream cones, and we at FatBoy think you’ll find that our Sundae Best definitely passes muster.