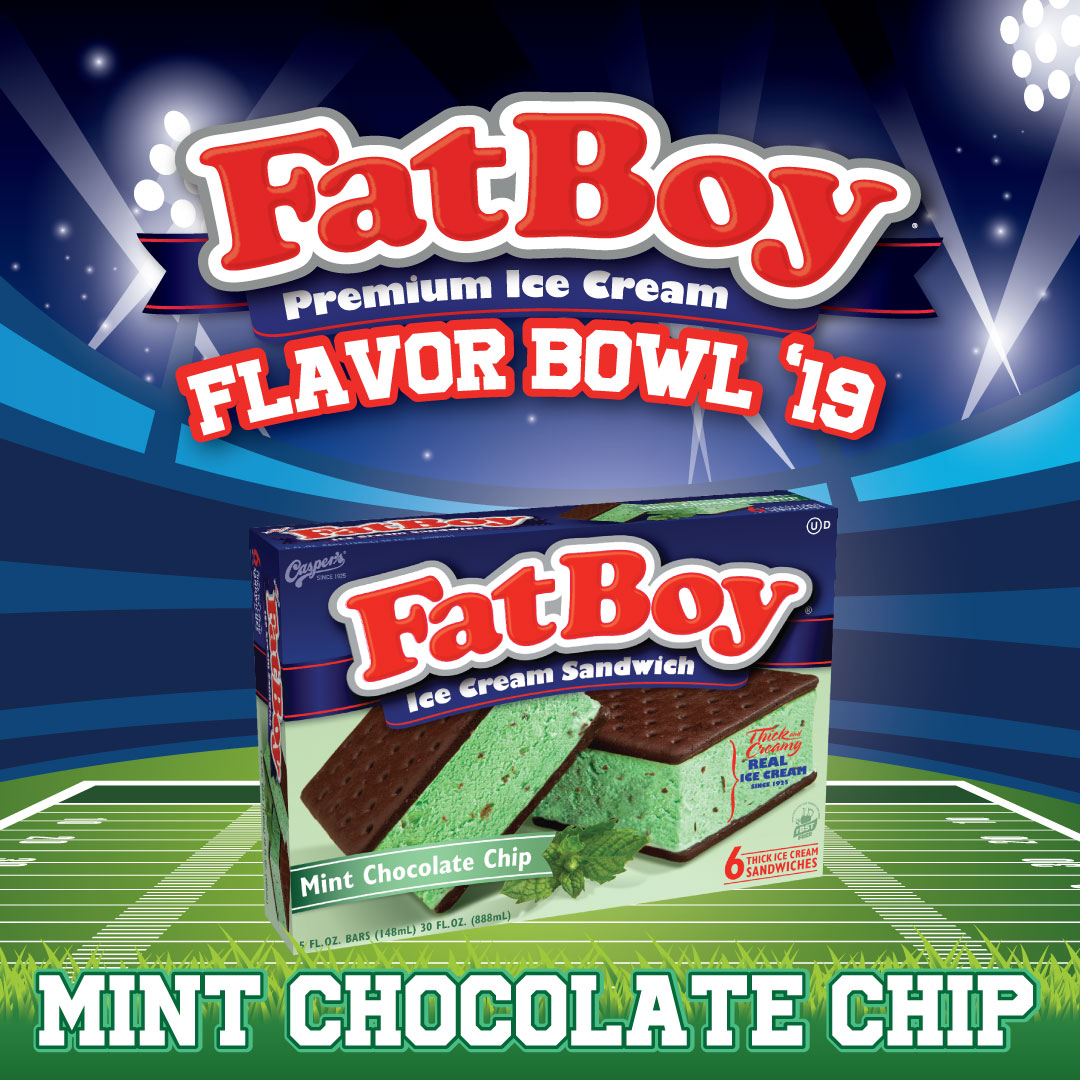 Posted at 17:21h in Uncategorized by tatisoutham 0 Comments
0 Likes

Easily the coolest customer on the block, Mint Chocolate Chip is here to shake up the 2019 FatBoy Flavor-Bowl!  Mint Chocolate Chip, like several other FatBoy Flavor-Bowl Players, harnesses the power of chunky, sweet chocolate, but it uses it to accent the intense and chilling flavor of mint ice cream.  The combination of mint and chocolate chip is beloved by many, so it’s definitely a contender for this year’s Flavor-Bowl Championship.  Let’s take a look at some details:

The History of Mint

“Mint” is actually the name given to a whole family of plants, which include many popular herbs used for cooking, such as basil, rosemary, oregano, and thyme!  Of course, the mint flavor we know from Mint Chocolate Chip ice cream doesn’t taste anything like basil or thyme or any of those herbs, but it does have a very strong, aromatic flavor that makes it unique.  Underneath the family, “Mint,” however, is the genus Mentha, which includes the 13 to 18 species we commonly think of as “mints” – including spearmint, peppermint, and banana mint.

The species Mentha Spicata is what we commonly know as spearmint, and it’s the mint flavoring that makes up most Mint Chocolate Chip ice cream.  Today, it’s renowned for it’s powerful icy flavor and breath freshening properties, but it’s been used throughout history for culinary and other purposes.

There are written records of humans using spearmint as far back as 2000 years ago.  There’s even evidence to suggest that people were using mint to make toothpaste as early as the 14th century.  And on this side of the pond, mint was an important cash crop for some colonies during the American revolutionary period.  Colonists drank an awful lot of mint tea in those days because it was not taxed the way more traditional tea was.

As an herb, spearmint has been used medicinally as well.  The potential medical uses of spearmint include fighting tumors, antioxidant power, and antimicrobial properties.  So spearmint, then, is just an all around good plant.  It helps freshen breath and clean teeth, ward off tumors, boost immune health and, oh yeah… it tastes awesome!

The history of mixing mint and chocolate flavors is a little obscure, but the combination goes back to at least the early twentieth century in cookies. As an ice cream flavor, Mint Chocolate Chip came into existence in 1973 in England, when culinary student Marilyn Ricketts entered her version of the flavor into a contest and won, allowing the dessert to be served at the Westminster Abbey Wedding of Princess Anne and Cpt. Mark Phillips under the name “Mint Royale.”

As an ice cream flavor, Mint Chocolate Chip has held its own in the popularity game.  At the turn of the century it was in the top ten most popular flavors in the United States.  As of 2017, it ranked number four!  It’s popularity has allowed the flavor to spread to other types of dessert, including cookies, meringues, and pies.  While most Mint Chocolate Chip Ice Cream is artificially colored green, some natural or organic varieties may be white.  Some peppermint varieties may be colored red as well.

How Mint Chocolate Chip Stacks Up

A hugely popular flavor in its own right, Mint Chocolate Chip is here to compete.  It’s a cool, cool customer, and it’s got the confidence to bring the fight to the big boys like Chocolate and Vanilla.  Mint Chocolate Chip is for those who love an intensely cool sensation on top of already deliciously cold ice cream and some crunchy chocolatey goodness to finish it all off.  With that, here’s what Mint Chocolate Chip brings to this year’s FatBoy Flavor-Bowl:

Mint Chocolate Chip is no joke.  It brings icy cool intensity, widespread and rising popularity, and an attitude to be reckoned with to this 2019 FatBoy Flavor-Bowl competition.  Premium Vanilla has popularity, Chocolate has bold smoothness, Chocolate chip cookie has the best of all worlds, Cookies N’ Creme has extreme chocolate and vanilla flavoring, and Strawberry has complete originality.  Can Mint Cocolate Chip stay cool in the face of such seasoned competition?  It will be fun to see where the chips – chocolate or otherwise – fall!  Check back soon to see which of these fearsome competitors will take home the title of 2019 FatBoy Flavor-Bowl Champion.