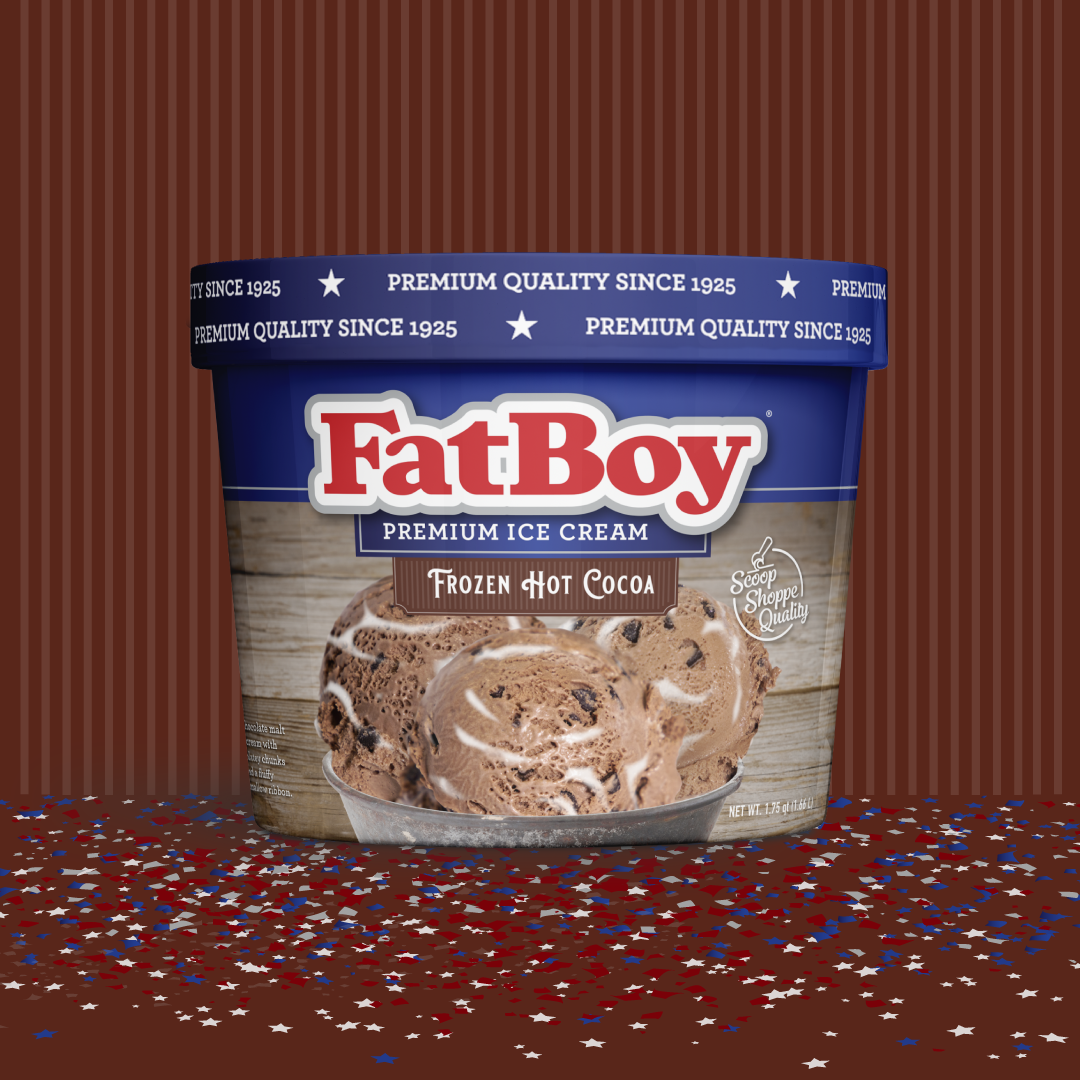 Picture this: it’s one of those below-zero winter nights. The trees outside are bending under the weight of the snow and the sun disappeared hours ago. The wind sneaks in under the door and you hike your slippers up onto the couch in front of a roaring fire, but you just can’t warm up. You’ve tried everything! You’ve even broken out the Snuggy. (It’s okay, we won’t judge.) Then it hits you: hot cocoa. It warms you from the inside out, smooth chocolate melting away any thoughts of the icy world outside. Hot cocoa is medicine for the frozen soul.

But what if you want that rich, comforting feeling now? In the middle of a scorching summer? No, you’re not crazy.

That’s where we come in! Introducing FatBoy Frozen Hot Cocoa tubs! All the silky smooth chocolate you crave, none of the heat you don’t. Let the creamy frozen drink cool you off as you relish in the unexpected chocolate chunks you won’t find in a steaming mug of hot cocoa. Yes, you heard us correctly: chocolate chunks swirled in smooth frozen hot chocolate. Yes, we’re serious.

Where did hot cocoa come from?

If you’re like us, you’ve probably been enjoying hot cocoa for most of your life. What winter night wasn’t complete without enjoying a warm mug of cocoa and arguing with your siblings about who got more tiny marshmallows? Hot cocoa has always been there for us. But have you ever stopped to wonder how the (glorious) tradition of drinking steaming liquid chocolate came to be? It’s easy to take for granted, but hot cocoa had a long, arduous journey from its invention to the drink we enjoy today.

Cocoa drinks can be traced back to Mayan and Aztec civilizations, meaning people have been consuming liquid cocoa for a very long time. However, the early drinks looked a little different than the sweet treat we enjoy today. Cocoa beans were ground into a paste and mixed with water, cornmeal, and even chili peppers to create a foamy, bitter drink that quickly became a cultural staple. Okay, that might not sound super appetizing, but sweetened chocolate hadn’t yet been invented and the rich, bold taste of cocoa beans was highly sought after.

When the concept of cocoa drinks was introduced to Europeans, it underwent many changes. For one thing, it was originally served cold and with water instead of milk. Emperor Charles V of Austria took particular interest in the bitter beverage, having never tasted something quite like it. Simultaneously, cocoa became a trendy, exclusive drink among the Spanish elite. Because cocoa beans were grown and harvested in South America and the journey to Europe was long and difficult, cocoa products were extraordinarily expensive. For a long time, cocoa products were considered luxury goods and were attainable to only the wealthiest Europeans.

Sometime in the 17th century, someone got the idea to sweeten the rich, bold flavor of cocoa beans with honey and eventually sugar to create chocolate as we know it today. Cue the hot cocoa we all know and love. Originally infused with vanilla, amber, jasmine, and musk, early forms of hot cocoa were spicy, sweet, smooth, and still unattainable to most citizens. Over the years, though, as trade among continents was streamlined, the price of cocoa eventually fell, making the “drink of the gods” as it was known more attainable. Needless to say, it spread like wildfire.

How does hot cocoa look around the world?

Today, hot cocoa looks different depending on where you are in the world. In Europe, particularly Italy, it’s often thickened with cornstarch into a pudding-like consistency, making it more like a full meal than a sweet treat. In Spain, hot cocoa is traditionally served with warm churros while in Germany, bars of chocolate are melted down, mixed with milk, and topped with whipped cream.

The United States is notorious for instant hot cocoa. The packets often come with mini marshmallows, candy cane stir sticks, or packets of powdered sugar. While some people say it’s not as decadent as it is in other parts of the world, instant hot cocoa means more people can enjoy it on a regular basis. In South America, hot cocoa is enjoyed with breakfast and is often paired with cheese. Can you think of a better pairing than cheese and chocolate?

While hot cocoa wears many hats, one thing is certain: no matter the form, hot cocoa is the MVP of drinks. Now, in its newest form, it’s also the MVP of desserts. Two things that are universally adored? Hot cocoa and ice cream. Now, at long last, the two don’t have to be separate anymore.

Hot chocolate warms you from the inside out in more ways than one. Due to the antioxidants found in cocoa, some people claim additional health benefits to consuming chocolate. Hey, we’ll take it! Let the cocoa warm your soul and the ice cream cool you off. You no longer have to wait for the cold to hit to enjoy your favorite sweet treat. Our 56-ounce tubs will get you through even the worst hot spells.

FatBoy uses only premium ingredients to hit you with the very best flavors and textures you can imagine. Smooth? Check. Creamy? Yep. Chunky? Uh-huh. We’re getting hungry just thinking about it! Pick up a tub today and experience your favorite indulgence in a whole new way!